Inspiring Authors - Who's Your Favorite? Fun Is For Shallow People by Elizabeth Myrddin Book Tour & Giveaway

Authors That Have Inspired Me

What a loaded topic, right? We all have our favorites and over time, some authors may fall out of favor and new ones slip into their place. Or, authors from long ago can be discovered or re-discovered and zoom to the top of such a list. For this guest post, I’m going to pick a handful of authors who continue to influence and affect what I enjoy reading and whose books have inspired my Muse in an indelible fashion.

The below is in no particular chronological order, nor are they listed on a scale of importance.

Tennessee Williams: He wrote amazingly complex female characters that are appealing as well as appalling. All of his characters are flawed in ways both nuanced and obvious, and therefore relationships between characters are fascinating and perhaps also a little uncomfortable. He also wrote brilliant dialogue that is at times lyrical and poignant, and at other times reads like a sharp slap or a punch in the heart.

Tanith Lee: I slid down the dark fantasy rabbit hole with my first Tanith Lee novel (Book of the Damned) and I now have shelves of her books. Her writing is lush and vivid. Unusual twists abound and a strange sort of darkness glimmers around the edges of her stories and her characters, including those in the hero/heroine roles. Her Blood Opera series is my favorite and I’ve re-read those books many times over.

Ray Bradbury: Absorbing science fiction that is textured, colorful, and poetic. I started to read Bradbury in my childhood, and still love his writing. The Martian Chronicles is a beloved favorite.
Jacqueline Susann: Specifically, Valley of the Dolls. A pulpy, trashy, bitchy, book with intertwining storylines and more of those damaged, easy to love/easy to hate characterizations. Dishy, escapist reading, at its finest!

John Kennedy Toole I laughed myself silly at the first read of Confederacy of Dunces. This book marked a turning point in my writing preference as it sparked a fresh love for novels told from multiple POVs. In Confederacy, being in the heads of so many characters was one of the highlights of the novel. Each character was so clearly and cleverly written and the result was hilarious and satisfying.

Octavia E. Butler: Specifically, her Xenogenesis book trilogy. Otherworldly stories and characters. There is a depth and strangeness to her writing that has stayed with me, and I think it’s time to revisit her works again.

William Gibson: His books are absorbing and I find his writing style to be compelling and engaging. Of all his books I’ve read, I have a special kind of love for Neuromancer and Pattern Recognition.

Oscar Wilde: The master of the shrewd bon mot as well as the scathing observation – sometimes in the same quip! The Picture of Dorian Gray is a masterpiece, and each time I read it, I discover new gems of pith and truth.

Clark Ashton Smith/H.P. Lovecraft/Arthur Machen: A fabulous trifecta of authors who have written ornate horror and dark fantasy tales that are filled with unknown things that lurk and loom. Wonderful and inspiring.

F. Scott Fitzgerald: I am a Fitzgerald fangirl. There is just something about his writing that draws me in. I lose myself in his stories and spiral downward with his characters into whatever dark night of the soul they are experiencing. The Beautiful and Damned is my favorite.

Agatha Christie/Ruth Rendell: I’d be remiss if I failed to add a couple mystery writers. There are so many, but these two have left the deepest mark on me and both stimulated my interest in writing mysteries.

Elizabeth Myrddin works, lives, and plays in beautiful San Francisco. She writes for enjoyment and because the individuals and experiences that pepper her life, for good or for ill, inspire her. Although her writing tends to lurk on the darker side of storytelling, she finds the soft-boiled pulp mystery subgenre appealing. Fun Is For Shallow People is her first full-length novel. The penning of Part Two of the story is already in progress. 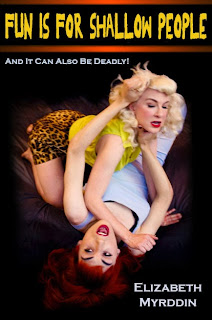 Parlors, petticoats, and poison! A half-empty bottle of absinthe and a dead man in costume are found in a drifting rowboat. As Detectives Ted Rose and Alexa Sheldon unravel intrigue and ferret out motive, they bump up against the heaving bosom of theatrics that is the Laurel Bay Costume Society. Soon, a group of suspects emerge from the clique of unconventional people. Two beautiful women seek to influence the proceedings. One is Trina, the blond, wanna-be femme fatale. The other is Yvette, the cunning, red-haired scene queen. Yvette and Trina turn their battle for social standing among peers into an extreme sport as they try to sway the investigation. Ted and Alexa are determined to out-maneuver the manipulators in order to crack the case.

They entered the flat and Ted spent a few moments taking it in. The front room resembled a cluttered Victorian parlor. Memento mori décor dominated the space. A row of antique cabinets lined one wall – one a large taxidermy display filled with stuffed birds and reptiles, a black rabbit sitting on its haunches, and a sleeping fox. The other cases held old-fashioned apothecary containers, teacups, and various other decorative items – all vintage looking. The décor in the room was overwrought, but he was fascinated by the more macabre items, one of which was a large casket in a corner propped on end being used as a sort of open closet for wigs, hats, scarves, and gloves.
Ted watched Yvette closely as he asked, “You know a Nathan Collier, correct?”
She narrowed her eyes. “Nathan is my ex-husband. We’ve been divorced for a short while, and we travel in the same social circles, but only out of necessity. Whatever trouble he’s in, I don’t want any part of it.”
As she spoke, Yvette straightened her posture and tilted her chin slightly upward. Her attitude made it clear she wanted to exhibit disdain, which she did in an exaggerated fashion that was almost comical. With an affected gesture, she tossed her long hair behind her shoulders and awarded Ted a polite smile.
He scrutinized Yvette, his gut pinging. The way she talked and presented herself mirrored that of the Meryl Streep character in She-Devil. Instead of blond hair like Streep in that movie, Yvette’s was a bold plum red, long and wavy. What was that character’s name?
After Yvette breathed a heavy sigh, she said, “I’d really like to finish my makeup. Please continue with this business of yours, whatever it is.”
“At the park event on Sunday, did you notice Mr. Collier or anyone else missing at any time?” asked Alexa.
A frown creased Yvette’s forehead. “I am the organizer and hostess for that event. I had too much going on to pay attention to Nathan’s whereabouts. He was probably screwing around somewhere, which would be typical. And I certainly can’t recall the location of everyone else. I was focused on my poetry recitation and those of the others who participated.”
“Where did you go after you left the park?” pressed Alexa. “Did you return home or go elsewhere that same night? If you were with another person, we’ll need him or her to verify your whereabouts.”
Yvette raised her eyebrows in surprise and stiffened. She replied as though affronted. “After the event ended at four, I returned here to change out of my Mary Shelley costume. Then I met up with my current paramour, Gabriel, at his place at about six or seven for supper. We stayed in at his apartment the rest of the night and I returned home the next afternoon.” Yvette gestured to a nearby couch, “Would you two care to sit? I get the impression this might take a while.”