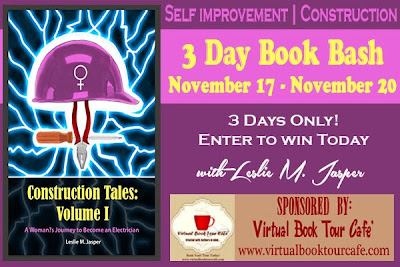 Construction Tales:Volume I
by Leslie Jasper 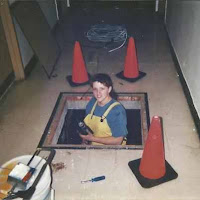 Leslie is a journeywoman electrician who works within Westchester County, New York, Fairfield County, Connecticut, and the five boroughs of New York City. Leslie has worked within the construction industry for the past 17 years. She is also an evening OSHA instructor/writing coach working part time for Empire College. Leslie recently graduated and received an MBA with honors at Iona College in New Rochelle, New York. She lives with her two sons, Tom and Johnny, in Lake Carmel, New York. Leslie enjoys spending quality time with her sons such as snowboarding and visiting haunted houses throughout New England. She also enjoys cruise ship traveling around the world, renovating her home, and spending time lifting weights in the gym.

Why Book Covers Are So Important

I believe book covers are very important since they are supposed to catch the reader’s attention. Within seconds, the reader should be able to get an idea of what the book is going to be about. Since my book is about working in the electrical industry, the lightning bolts seemed very appropriate. I also wanted to represent the power of my choice to enter this field and earn my journeywoman’s card. This was despite to the many challenges and hurdles I had faced along the way in order to finish my apprenticeship. I was hoping that they would be eye catching as well. Since I am a female working in a man’s field, the hard hat on the cover needed to be pink. I would not actually wear a pink hard hat at work. I would be made fun of by my coworkers. Therefore, I would find that choice undesirable.

The title should also catch the potential reader’s attention. Based on the title, the reader should know that the book will be about a bunch of construction jobsite stories. These stories are told by a woman who entered the industry and became an electrician. The reader should also know that there are going to be more stories released on the horizon in additional volumes. My intent of the book cover was to provide a million words in the matter of seconds to the eye.

Strap on your work boots and put on your hard hat. Let me take you on a sheetrock dusted journey to 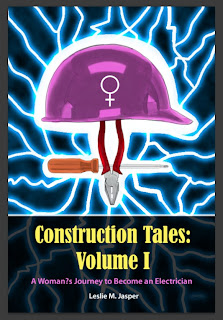 see what it is like to work within the construction industry. The work is hard, the environment is unforgiving, and the jobsite can be either extremely hot or cold. Almost 17 years ago, I stepped foot into a male-dominated work environment. Despite the lack of a warm embrace, I pushed my way into this world to learn the trade. I showed my many mentors that I wanted to be here and was ready to learn and work. After some grit and sweat, I worked my way out of my apprenticeship to become a journeywoman electrician. I earned a great working reputation within my trade and some aches and pains along the way. I work with guys from all backgrounds and all walks of life; and a few females that share my goal to be called journeywomen. Construction workers do not care that you do not feel up to the challenge that day. You must suck it up and get the job done! You will witness what it is like on a weekly basis to work within my industry. Every story in this book is real. The names of my co-workers have been changed to protect the innocent….or the guilty! I must warn you that this book is not for the faint of heart!

Chapter 3- The Big Job
Construction Tales: Volume I: A Woman’s Journey To Become An Electrician

I was sent to work on a brand new job coming out of the ground in Connecticut. This job would provide massive amounts of overtime and help my living situation tremendously. I learned real quickly that the pace on this job was very different from my last job. It was more of a laid back, easy-going work environment. I would have never guessed that I was about to meet a whole group of characters on this very large job.
I set foot on the largest construction job I had ever witnessed at this point in my apprenticeship. By this moment in time, the country was coming out of a recession and this massive deck job was going to catapult many trades’ people into a good financial position. My first day was in a giant room that was in the process of becoming the data center for a very large trading floor. As an apprentice, my first three hours of the day were all about getting coffee for a third of the crew of roughly 100 electricians. There were no elevators so two other apprentices and I had to walk up a minimum of six (up to thirteen) flights of stairs and provide coffee for the group of hungry and hung-over electricians each day.
The coffee trek was a half-mile walk to the deli each morning. I placed my order and sat there with the other apprentices until the order was ready. I had to make sure I had proper change for each person who ordered and double-checked all orders for accuracy. Coffee was the most important part of the day and screwing up the order could ruin the entire day. This was especially true when we went into overtime. If you got the coffee order wrong, plenty of these guys would react like spoiled children and have an actual temper tantrum. I started to get to know two fellow apprentices, Ryan and Todd, very well while getting our daily orders of coffee. I will never forget my friendship with these two fellow apprentices.
Ryan was a tall, dark-haired, and very hairy guy from a community normally filled with rich and upper-class folk. Ryan often reeked of body odor, cigarette smoke, or booze from the night before. He was and probably still is clearly a fish out of water in his community, yet he fit right in on a construction site. Ryan played in a band. He was very rough around the edges, with plenty of piercings all over his face. Ryan came in to work on a regular basis hung-over, often stinking as if a keg of beer had been splashed all over him. 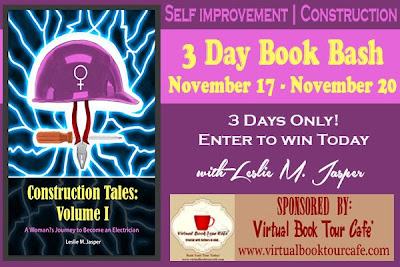 a Rafflecopter giveaway
Posted by Unknown at 5:30 AM